Dr. Who (The Early Years) - Part 59 "Resurrection of the Daleks" 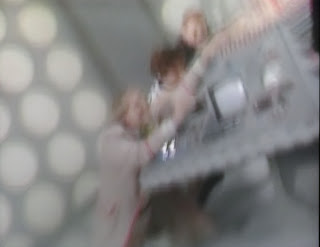 The Tardis is being jolted about in the time eddy. Desperately trying to free the Tardis before it breaks itself apart, the Doctor is successful, then lands on Earth to learn there is a 'time corridor' connecting Earth and some place in the future. While investigating an old warehouse, they meet Stein, a man stuttering and nearly crippled with fear. Turns out he's a trooper from the future, escaping the Daleks. As they continue their exploration of the warehouse, Turlough suddenly disappears, the Doctor fears he's stumbled into the time corridor. 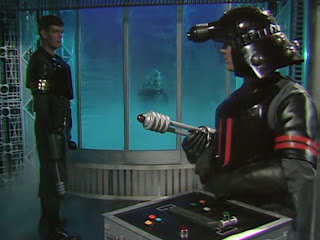 On the other side of the time corridor, is a Dalek ship. It has just docked with a prison ship and exterminated just about the entire crew, save for a few who managed to escape. They are determined to keep the Daleks away from their prisoner, Davros, at all costs. Even if it means destroying the ship. Because they were stale-mated by the Movelleans for so long, they have acquired human servants to help. The leader of this particular group is known as Lytton. Essentially all Dalek servants were human, but are now clones controlled by the Daleks. However, Lytton seems to be the exception. 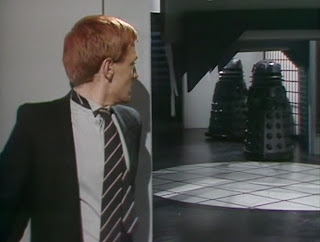 On the Dalek ship, Turlough is observed by the Daleks, but allowed to roam free. The Daleks hope to use him as bait to capture the Doctor. While on Earth, the Doctor and Tegan run into a military group who have discovered alien technology. The Doctor guesses what they are doing and helps them find a mutant Kaled creature. Tegan is hurt in the scuffle so the Doctor employs Stein to come with him in the Tardis to locate the other end of the time corridor. Stein is reluctant, but agrees. However, once on the Dalek ship, he suddenly loses his stutter and tells the Doctor he's a Dalek agent. 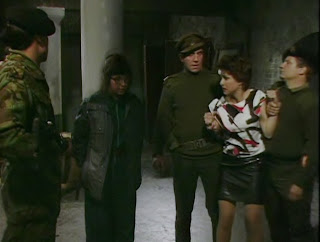 Turlough manages to run into the survivors of the prison ship and convinces them he's not a Dalek agent. But the Doctor is captured and on Earth Tegan's military friends are slowly replaced with Dalek agents. She's able to fool the military duplicates she's more injured than she appears with the help of Professor Laird. Their attempts to fool the duplicates fails are both are forced to enter the time corridor. Laird runs away in fear, but is brutally shot down. Tegan reluctantly enters the time corridor. But instead of running into Daleks, runs into Turlough who saves her life. Still unaware the Doctor is present, Tegan shows him the Tardis. 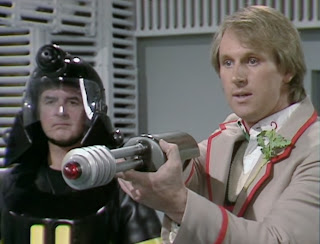 While being attached to the Dalek equipment which will drain the Doctors mind, he tries to convince Stein that he can break free from the Dalek conditioning. Eventually, the Doctor is successful. He destroys the machine and finds Tegan and Turlough. Taking them safely to he Tardis, he sets the Tardis controls for Earth, but heads out one last time to kill Davros. Much to Tegan's horror. However, when confronting him, he's reluctant to pull the trigger. Davros tells him he's like all Timelords, weak and only willing to watch, rather than take control. Reluctantly, the Doctor walks away. 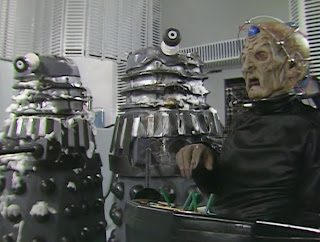 The Doctor escapes back to the Tardis via the time corridor to destroy the Daleks in the warehouse. Using the 'alien technology' found there, he unleashes a gas which is deadly to the Daleks. On the Dalek ship, the Daleks arrive to execute Davros, per Supreme Dalek's orders. However, Davros has the same gas at his disposal and uses it against these Daleks. Delighted, Davros makes his escape, till the gas suddenly begins to affect him. To make matters worse, Stein has broken free of his Dalek conditioning and activates the ships self destruct button. In the hub-bu, Lytton gets away. Back on Earth, the effects of the gas on the Daleks is horrifying and Tegan has finally had enough. She's seen to much killing and decides to leave the Doctor. Remembering something her Aunt Vanessa once told her, Tegan tells the Doctor it's stopped being fun. The Doctor pleads with her not to leave 'this way', but she runs away. 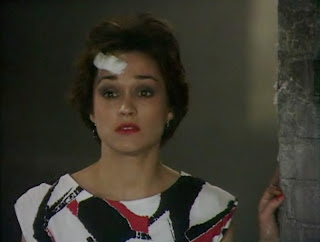 REASON FOR DEPARTURE: After seeing a lot of good people dying, one right in front of her, and countless horrific Dalek deaths, Tegan has finally had enough of the killing and decides to leave the Doctor. Though she does admit she's going to miss him.
Posted by Jeffrey Scott at 7:31 AM

Favourite Companion of Classic Doctor Who

Favorite Companion of the Sixth Doctor

When I finish reviewing Sylvester McCoy's Doctor should I....

Favorite Companion of the Fifth Doctor

Favorite Companion of the Fourth Doctor

Favorite Companion of the Third Doctor

Favorite Companion of the Second Doctor

Favorite Companion of the First Doctor

Favorite Costume of the Companion Collection

Favorite Costume of the Doctor Collection